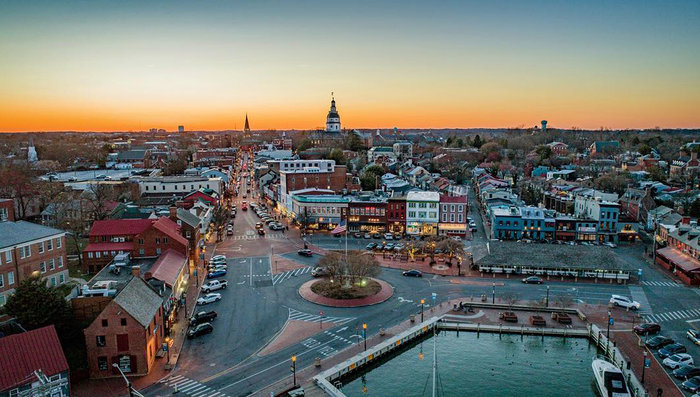 We’re at our half-way stop, in Annapolis, Maryland, in the Historic District. Annapolis was one of the first cities in the United States to receive the distinct honor of being a Historical District with the city dating back to colonial times in 1695.

The Historic District of Annapolis is built in a modified Baroque plan which utilizes a garden style layout similar to that of Versailles. One of the main features of this city layout is that there is a focal point for city, and in Annapolis, this is the Public Circle (528′ diameter) where the State House stood, dominating the harbor and town. The secondary focal point is a smaller circle which was for the St. Anne’s (Anglican) Church (340′ diameter). From these two circles radial streets extend outward towards the boundary of town. Although the town planners were following the Baroque style, they failed to fully achieve it because the radial streets did not end on the center of town, the the axis with the center of the circle with the State House as a terminal vista. Even though the full Baroque style was not realized, it was still unique for the period in North America.

Remaining in the historical district are 120 18th center buildings and National Historic Landmarks, the State House (1772) and the Hammond-Harwood House (c. 1774), and has more original 18th century structures standing than any other city in the United States.

Annapolis was and is still a cultural powerhouse, with performers, skilled artisans, and artists practicing their trades in the city. Annapolis featured the first theater in the new world.