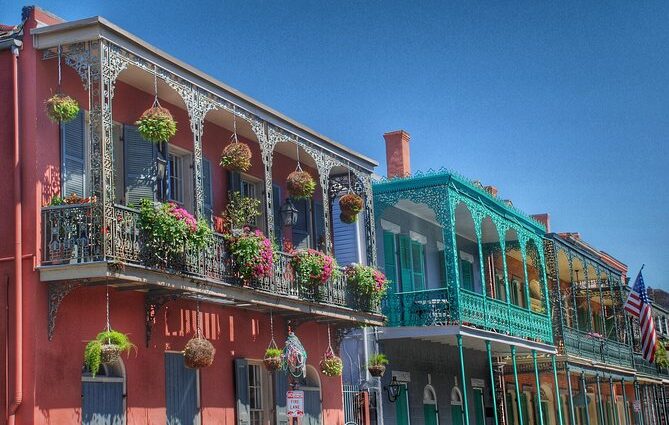 What is the first thing you think of when you hear New Orleans, Louisiana? For me, the French Quarter is definitely near the top of the list, if not the top; I also think of Mardi Gras, Beignets, and fun nights with co-workers (who are now great friends!)

The French Quarter (also know as Vieux Carre) is one of New Orlean’s most historic and well known districts. Established in 1718 by Jean Baptiste Le Moyne de Bienville, Director General of Louisiana when it was claimed by the French in the 1690’s. New Orleans didn’t belong to France long, when it was ceded to the Spanish in 1763 following the Seven Year’s War.

The famous architecture dates back to the mid-1790’s when the Spanish introduced strict new fire codes, due to two fires, in 1788 and 1794, banning wood sided buildings in favor for fire-resistant brick covered in stucco and painted in fashionable pastel hues. The still largely French population continued to build with style influenced by colonial architecture from the Caribbean adding timber balconies and galleries. Their influence can still be seen today.

There is so much history in this district that I cannot even begin to encompass it all in the short blog post.

Welcome! I'm Ashley and I've loved Color Street dry nail polish strips since before it was available as Color Street.